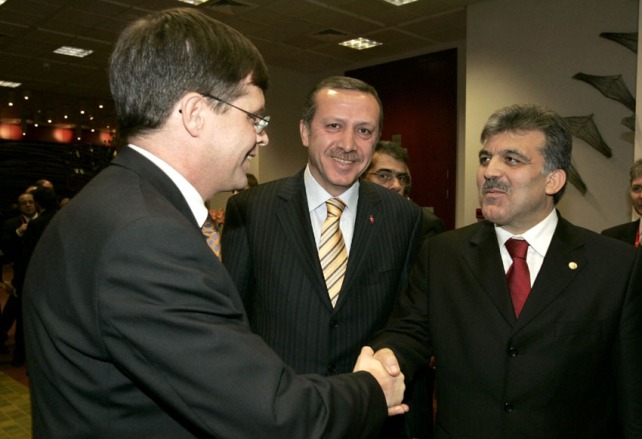 Turkey is a democracy, but not yet a liberal regime. It is a Muslim democracy but in a secular state built on strong republican principles very much wary of any religious, ethnic or any other “particularistic” identity. However, its ruling party since 2002, the Justice and Development AK party is a moderate Islamist party and promises to further democratize the regime and bring Turkey into the EU and in order to accomplish this, its leaders and supporters seem determined to reform some key principles and institutions of this system. The Kemalist republican model seems to have generated its likely demolisher and the latter has made a long way in a very short time in its transformation of the bureaucracy, the universities and the state institutions. Moreover, the old secular elites and the urban, secular middle and upper class population are in a serious crisis of political representation, considering the low scores of the Kemalist Republican People’s Party (CHP) or the Nationalist Movement Party (MHP) and the absence of another relevant liberal party to challenge AKP in the last two elections.

The Justice and Development AKP moderate Muslim government led by the authoritative, some might say authoritarian leaning, Prime Minister Recep Tayyip Erdogan, enjoys a comfortable majority in the one-chamber Parliament after the 2007 landslide victory in national elections and is engaged in a comprehensive process of political reform, hailed by its supporters as a process of modernization very much linked to its bid for a full EU membership. In 2009 Freedom House assessed Turkey’s Civil Rights and Political Freedoms and gave a double 3 Score (from 1-highest degree of freedom to 7-lowest degree) for these two categories, thus including Turkey in the partly free countries. Actually, these score have improved substantially, from a 5:4 score before the November 2002 elections, when the AKP received almost two thirds of the seats in the legislative and thus set in motion heated and at times violent disputes concerning the republican constitution and the rights of ethnic and religious groups, the ailing checks and balances principle between the legislative, the executive and the judiciary and especially the restive civil-military relations.

This week, the AKP pushed even further its plan for political reforms and sent to Parliament a package of 25 Constitutional amendments that are considered to be, depending on the pro or anti AKP camp, a new effort to democratize Turkey in line with EU’s norms or, on the contrary, a decisive grab of power by the AKP at the expense of the judiciary and the rule of law principle. This constitutional revision, if it passes through the legislative vote and the Constitutional Court, would be the most important change to the post coup 1982 Constitution of the military junta, largely serving the interests of the army as a veto player in civilian affairs. Since coming to power in 2002, the AKP challenged a series of practices and norms of the Kemalist polity, especially since Abdullah Gül, a Muslim and a member of the former Welfare Party, banned by the Constitutional Court because of its Islamist values, became president. The Constitutional Court (CC) and the Supreme Board of Judges and Prosecutors (HSYK) together with the Security Council are the main footholds of the secularist supporters of the kemalist tradition and the strategic positions for dominating the access and the exercise of political power. These institutions are, therefore, the principal objectives of the Constitutional revision and AKP’s intention is to change the way their members are nominated and account for their acts in front of the legislative. Moreover, one key leverage of the constitutional court until now was its ability to ban political parties for unconstitutional attitudes, a strategy directed especially against Kurdish and Muslim parties. One of the AKP’s amendments is directed precisely against this arbitrary power of the CC, as this party was recently under the scrutiny of the Court, who failed to ban the largest, majoritarian party in the legislative by only one vote. The amendment would set limits to this discretionary power of the judiciary and will give the largest prerogative to the Parliament in deciding who to ban.

If we are to follow the classic definition of a consolidated democracy, Turkey has still to block the role of the army as a veto player able to resist or even change the rules of the game every time it feels threatened. This is one of the major ambitions of the AKP, who will try to pass through parliament the abolishment of the article 15 stating the immunity of the 1980 coup perpetrators against civilians and in some circles seen as a leeway for restive officers unsatisfied with civilian leaders. Moreover, the reform, if successful, will bring soldiers in civilian courts for a large number of offenses against human rights that are administered in military courts and, thus, largely overlooked. The definitive confinement of the military to the barracks is a tough objective for the AKP, and the various coup plots, massive arrests of officers, intellectuals and journalist accused of plotting against the Republic in the last 2 years are the perfect illustration of a fragile equilibrium of the civil-military relations in a country that experienced four military coups in the last four decades.

Another vital issue of this reform is the need to reformulate the electoral law and the political party law in order to eliminate the arbitrary exclusion of various parties and especially the exclusion of the Kurds, be it through the 10% threshold barring the entry of parties to parliament or through the arbitrary decisions of the Constitutional Court, as this was the case in autumn 2009, were the pro-Kurdish Democratic Society Party (DTP) was banned in an arbitrary manner, according to Human Rights Watch assessment. This move was seen in the liberal circles as a major setback in the Kurdish agenda of progressive opening to their political and cultural rights and this in the context of a growing wave of ethnic claims of the largest minority group in Turkey.

The major objective of this constitutional change is a far-reaching institutional reform that will enforce the parliament without any doubt, conferring to the legislative the crucial voice in deciding who stays inside and who should be banned from the political game, moving this prerogative away from the judicial power, where the army and the anti-AKP camp maintain a strong hold. However, it is precisely this new wave of democratization that worries a large part of the Turkish society. Since 2002, AKP’s electoral success and its colonization of the administration and a significant part of the academia (and especially the law schools) corroborated with a significant rise in the number of institutions of religious education (madrasah) brought a split between the urban, secular Turks in the big cities like Istanbul, Izmir or Ankara and the Anatolian rising middle class very much willing to accede to positions of political authority and in the bureaucracy and thus to gain a more authoritative voice with respect to the public space and the norms and values that should preside over it. And here intervenes one major dilemma of this top-down democratization effort. Prime minister Tayyip Erdogan is firm in his decision to push through the Parliament the constitutional amendments but he still needs the support of some 20 members of the opposition. The pro-Kurdish DTP seems to favor many of the propositions put forward by the AKP, especially those referring to the trials of the officers who perpetrated crimes against human rights in the 1980 coup and after. However, should the vote in the Parliament fail to give a favorable answer, Erdogan announced a referendum this autumn on this constitutional project. Some analysts have warned against risking AKP’s popularity before the November 2011 legislative elections, but a greater danger than the erosion of AKP’s popularity would be precisely to win the referendum and thus to further alienate the anti-AKP parties and society, all by providing them with a legitimate critique of plebiscitarian methods of modernizing the Republic.

Although reaching a more consensual path to promote his constitutional reform will be a difficult task for Erdogan, and this all the more so considering the refusal of opposition parties to cooperate, this present context could be a critical juncture for Turkey and could provide the best model available for the relations between democracy and Muslim societies. The president Gül and the premier Erdogan have a series of tough decision to make in order to consolidate the democratic and liberal model of European polities and their success in accomplishing this task through a consensual agreement between the civilian elites would finally confine the military to the barracks, bereft of its legitimacy originating in the Kemalist model of state-building and (tortuous) democratization.

AKP’s commitment to further democratize the political regime is legitimated by Turkey’s bid for full EU membership and the European conditionality is beyond any doubt the most important factor in the recent opening of the system to the Kurdish minority, the recent dialogue with the Armenian government or the efforts to reach a solution in the Cyprus conflict. However, Europe’s hesitations in welcoming Turkey as a full member coincides for some time now with a growing disenchantment of the Turkish population with EU membership according to a 2009 German Marshall Fund policy brief, reporting that only 48% of the respondents approved the prospects of Turkey’s EU membership, a sharp decline since 2004, when 73% considered it a good thing. Moreover, this popular disenchantment is accompanied by a strategic reorientation (energy, economic trade, academic exchanges, migration) of the Turkish government towards its southern neighbors (Syria, Iran). This recent trend is not only a challenge for Turkey’s strategic decisions concerning its position between Europe and Asia, but also a test for Europe, who should decide in the next few years what to do with Turkey and how much a responsibility does EU have in the fate of Turkey’s political commitments. Again, the consequences of Erdogan’s likely success in this ongoing process of political reform are very much dependent of one essential question: will the Muslim AKP win this political battle in order to consolidate its EU bid or will it win outside Europe?